There is a lot of kinds of Falcons but here we discuss the only the kinds which is well known in falconry.

The saker falcon originated in southeast Europe and Asia. Their preferred habitats are the open plains and forest steppes. They can be found on the steppes of Mongolia and of

The saker falcon is about 18 inches tall. They have large eyes and a short, hooked beak. Steppe saker falcons use the nests of Black Kites (Milvus migrans) and Imperial Eagles (Aquila heliaca). The mountain saker build its nest on cliffs. Saker falcons lay 2 to 5 eggs. In the winter they migrate south to Kazakhstan and the Middle East.
They spent most of their time hunting for mammals like voles, rats, stoats, weasels, northern pikas, Siberian chipmunks, and birds. They dive for their prey at 200 mph. The saker falcon are ferocious hunters and often attacks prey that is bigger than itself. Female saker falcons are more ferocious than the males and are preferred by falconers. In the wild they have no natural enemies, except man.


The larger, dark brown and gray barred Altai Saker falcons are the favorite bird of Arab falconers. Many of the birds are trapped in Arab countries when they are on their migration to the Middle East. In the past it was the custom to capture juvenile female sakers and train them to hunt because they were easier to train than adult birds.

Because the birds have become scarce, both adult and juvenile birds are now being caught throughout Asia and sold to the Middle Eastern falcon market. Without breeding adults in the wild, the saker falcon's population is in danger of declining.

There are no accurate figures for the population of Saker falcons, but it is believed that there are only 1,000 pairs of birds left in Russia, and 130 pairs in the rest of Europe. Some scientists think the decline of the steppe Saker is caused by the regional extinction of their preferred prey, the Red-cheeked Sousliks (Citellus erythrogenys), which is a type of ground squirrel. Global temperature changes has brought about changes in the vegetation on which the sousliks survived. Because the climate changed, the plants which Sousliks ate died, which caused the Sousliks to die off in that region, which is causing the Steppe Saker falcon population to decline. There are only about 200 pairs of Steppe Saker falcons left and they may become extinct in the next 10 to 15 years.

The gyrfalcon is a bird of prey that primarily lives in the arctic areas of Europe, North America and Asia. Females are about 35 percent larger than males, and they are the largest of the falcon species, weighing up to 4.5 lbs (2.0 kg), having a length of 20 to 25 inches (50 to 63 cm) and showing a wingspan of up to 4.5 feet (1.3 meters). The color of the birds can vary from almost pure white to dark gray with white streaks, and populations in different areas will generally tend towards particular color variations. The gyrfalcon is highly regarded in the sport of falconry, and in medieval times, people considered them difficult to obtain, which generally meant that kings and other noblemen were the only ones that could use them. In the northwestern territories of Canada, the gyrfalcon has been recognized as the official bird, and it was also depicted on the original coat of arms in the Icelandic Republic.

In terms of habitat, the gyrfalcon is often found in both tundra areas and along the edges of the boreal forest. They generally prefer open areas with cliffs near rivers or along the shoreline. During the harsher parts of the winter, when weather makes it difficult for them to find prey, they can sometimes migrate south looking for more abundant food sources.

Gyrfalcons have a varied diet including everything from ptarmigan to small birds, waterfowl and rabbits. When searching for prey, the birds will normally either circle the ground scanning for movement or watch while perched from a convenient lookout spot. They generally attack by flying low to the ground and chasing their prey, eventually overtaking them and diving in for the kill. Sometimes when hunting other birds, the gyrfalcon can catch them in mid-flight. Partly because of their size, gyrfalcons are believed to have no real natural predator except for the golden eagle.

Between two and three years of age, gyrfalcons become sexually mature and begin mating. The animals aren’t able to construct their own nests, and they generally use natural depressions along cliffs or take advantage of abandoned nests from other birds. Gyrfalcons normally lay between three and five eggs, which take approximately 35 days to incubate. Males and females form a pair bond, and both will incubate the eggs, with females doing more work than the males. The young birds are usually able to fly and become independent after about 50 days. 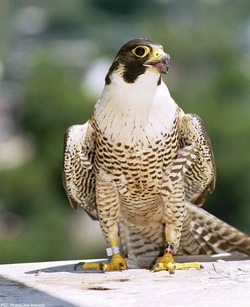 The Peregrine falcon is an amazing bird! Falcons look similar to hawks except for minor differences. The wings of a falcon are longer and curve at the back, ending in a point. You can also distinguish a falcon from a hawk by the falcon's dark eyes.

The scientific name for the peregrine falcon is Falco peregrinus. The name peregrine is Latin for wanderer. Peregrines got their name because peregrines often migrate long distances when the winter season comes. There are three subspecies or color variants of the peregrine falcon in North America. The subspecies include the American or Continental (anatus), Arctic (tundrius), and Peale's (pealei). The anatus falcon is the most endangered, followed by the tundrius.
The Peregrine falcon is a raptor, or bird of prey. This means it is a predator. Predators have an important role in the food chain, keeping prey animals in balance with natural resources. If no predators exist, prey will overpopulate their habitat and run out of food. Then the prey is in danger of starving.

The peregrine falcon eats a variety of animals. It eats mostly birds, but will eat bats and rodents. The peregrine's favorite food are pigeons and ducks. Peregrines hunt by mostly chasing their prey in the air. Animals being chased by a peregrine falcon have a 66% chance of escaping. The peregrines chase and swoop down at their prey at over 200 miles an hour, they squash their prey with their massive talons or stun it by colliding in midair.The falcon then quickly kills the prey by biting it's throat. Young falcons who are just learning to hunt may chase and eat dragonflies and other large insects.
Peregrine mates mostly stay together forever like humans do. The female is the dominant partner. The male arrives at the eyrie about a week before the female and shows off for her by fancy flying. The male partner scratches out a nest in the rock or gravel, where the female lays her brown, speckled eggs.The father sits on the eggs 25% of the day, and the mother sits on the eggs 75% of the day. While one parent stays with the eggs, the other parent looks for food. The parent that is looking for food stashes it near the nest so that no predators will take it from them. The female lays 3-4 eggs a year over the course of several days. The eggs have to be incubated for 33 days, and have to be turned over to develop properly. But sometimes if the egg breaks, one of the parents eat the inside of the egg, probably to keep the nest clean. Gross! When the incubating is done, the falcon eyases may take three days from the time they start to break out of the egg until they are fully hatched. When the hatchlings hatch they have a big appetite. Yum Yummy!! The mother falcon broods the chicks, keeping them warm with special hot spots on her body called brood patches until their body gets efficient at making heat at about one week old, while the father hunts for his mate and chicks. Once the chicks are big enough to be left alone a little, the mother helps hunt too. After 5-6 weeks the eyas are now fledgelings with their real feathers and are ready to fly. Fledgelings know how to fly with out being taught. Parent peregrines bring food to the edge of the nest, so the eyases push and shove to get to it. Finally the eyas fly off the edge to get to the food. Even after they fledge, or leave the nest to fly for the first time, they stay with their parents for about 2 months learning to hunt. Immature falcons molt or lose their baby feathers and get their mature ones during their second spring when they are a little over a year old. Peregrine females grow larger then the males. The peregrine falcon has 12 different calls, all of which mean different things. To listen to our (470KB) recording of an arguement over food between two male peregrine falcons.
Half of the population of peregrines die before they even reach their 1st birthday. If a peregrine survives all the dangers it can live up to 20 years. The reason most peregrines die before their first year is because of their enemies such as the great horned owl, foxes, raccoons and of course, humans. 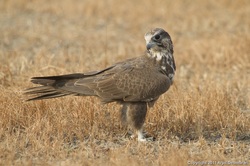 Description : Laggar falcons, sometimes called â€œLugger falconsâ€, are mid-sized birds of prey, about 39 to 46 cm long, with a wingspan of 110 to 112 cm. Their backs, wings and tails are grey-brown to rusty-brown. Their white chests and bellies are speckled (not barred) with black or dark brown spots. Their faces are white, with a dark stripe from their eyes downwards across each cheek, and they have a dark rusty-brown to black cap. Beaks are greyish blue, legs and feet are yellow. Females are slightly larger than males. Young birds are mostly brown with white chins and throats and some white on the breast. The brown colouration gradually disappears as the birds grow and moult. Laggar falcons are sometimes mistaken for their cousins, Lanner falcons. However, Laggar falcons are larger. Their wings, long and pointed, are aerodynamic in design and allow the birds to specialize in vertical dives.

Distribution : Laggar falcons are found in southern Asia, in the northern and central parts of the Indian sub-continent, from south-east Iran, Pakistan, Afghanistan, Nepal, Bhutan, Bangladesh, and north-west Myanmar.

Habitat : They are non-migratory, and tend not to stray from their territory in open country-sides, sparsely wooded plains, or other fairly arid open areas. They can also be found in cultivated or urban areas anywhere from sea-level to 1,000 m altitude.

Food : Their primary food source is other birds which they usually catch in flight, as they do with insects. They will also eat lizards, small mammals, and even occasionally carrion. Pairs will sometimes hunt together, with one bird flushing out the prey, and the other bird catching it.
falconry,falcon