How to catch a Falcon 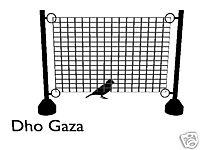 The dho gaza is a trap using a net mounted in front of the bait, which is secured to prevent its escape.  Again, any type of bait that will attract the hawk or falcon can be used.  The hawk or falcon attempts to catch the bait, collides with the net, and the net collapses around the bird, trapping it. 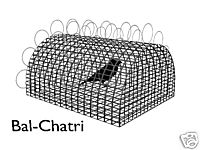 The bal-chatri, the most common trap in falconry, is a trap comprised of a noose-covered cage containing the bait.  Bait can be a mouse, a rat, a sparrow, a starling, or any creature which will attract the attention of the hawk or falcon to be trapped.  When the hawk or falcon attempts to catch the bait, it's stopped by the cage, with its feet becoming tangled in the nooses. 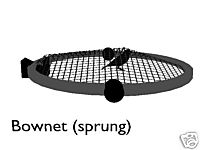 The bownet uses a spring-loaded mechanism with the secured bait at the trap's center.  When the hawk or falcon catches the bait, the bownet, either remotely operated or through the use of a mechanical trigger on the trap, springs open over the bird, catching it in the net strung between the two arms of the trap.
These are the most popular sizes of nooses for all types of traps. They are available in packages of 22 each. We have seen them attached to all types of traps including pigeon harnesses.

Wire Nooses for Phai Traps: 20# and 30# nylon coated stainless steel nooses. The 20” inch wire is very sturdy, smooth and a bit thinner than monofilament. The package contains 22 pre-crimped wire nooses, crimps for attaching to a trap. We use these nooses here at Western Sporting for our Balchatri trap and Phai Traps. 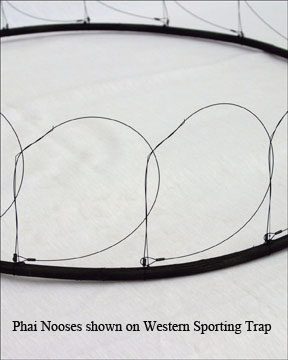 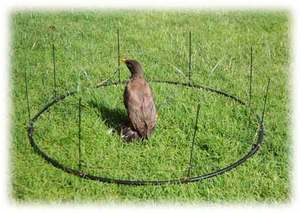 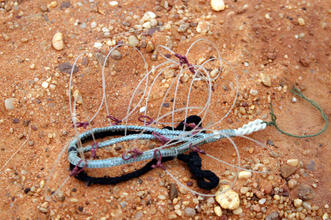 Noose pad traps can be divided into two types: those used on live bait, and those used on already caught bait.  In the case of the former, a noosed harness is placed onto the bait.  The bait, often a starling or pigeon, is secured, and its attempts at escape bring in the hawk or falcon, resulting in the trapping of the bird's feet in the nooses.  When a noose pad is used on already caught bait, bait is captured by the hawk or falcon, and the bird of prey is allowed to begin eating.  Then, the hawk or falcon is scared away from its kill, and a flat panel covered in nooses is laid over the prey.  When the bird returns to continue eating, it becomes trapped in the nooses.      Since the bal-chatri is the most common type of trap, we'll cover how it's used in trapping.  To trap a hawk or falcon with the bal-chatri, you'll need the following things:      If trapping for falconry, it's a good idea to have with you jesses, anklets, gloves, a hood, a towel to wrap the bird in, and its giant hood (a box containing a perch for transporting the bird).      Trapping from a vehicle is often the easiest way to trap.  Drive around locations you've seen the type(s) of bird(s) you wish to trap, or locations where you'd be likely to find them.       Look for birds atop telephone poles or perched on the wires strung between them.  Birds that are flying or soaring can be hard to trap.  If you go trapping early in the morning, especially after a cold night, the birds will be perched where they roosted and are often hungry.   For the larger hawks and falcons, you should be able to spot them from a distance.  For the smaller birds, use your binoculars or spotting scope.  When you've found a bird you want, refer to the field guide to identify its age (for birds requiring that a passage bird be trapped).       Most birds are so used to cars that they will allow you to pass them without taking flight.  A slow-moving vehicle or one that stops will often cause them to take flight.  In most cases, they will only move down a few poles or so, but be careful and don't risk scaring them away.       Check your trap and bait, making sure everything is ready.  Orient your vehicle so that the trap will be deposited with the vehicle between the trap and the bird.  If your trap will fit out the window, roll down the window.  If not, open the car door enough to be able to drop the trap.  Then drive past the bird, going fast enough not to scare the bird and not so fast that you can't deposit the trap.  Toss the trap clear of the vehicle.  It should land in the bird's line of sight.  If the bird moves down a pole or two, don't worry.  These birds can see a mouse from over a 1/4 of a mile away--they can see the trap.       Drive a safe distance away and watch the bird with your scope.  An interested bird is easy to spot.  It will keep its eyes locked on the trap or glance at it often, sometimes moving closer for a better look.  Some birds will come straight to the trap.  Others will land beside it.  When the bird is on the trap and/or footing the trap, watch for signs of it being caught.  If it flails on the ground or attempts to fly and can't, it's caught.      Now, make your way as quickly as possible to the bird.  It will often assume a defensive pose.  Observe the bird for signs of good health--bright color of the feet and around the beak, unbroken feathers.  Cover the bird with a towel, and hold it securely.  In the darkness of being covered the bird will go limp, but be careful of its beak--it can still bite.  Being careful of the bird's feet, free them from the nooses.  If this is the bird you want, put on its jesses and anklets or take it home and put them on there.  Otherwise, release the bird and catch another. Tips: Be careful around roadways, thinking of your safety, of those traveling the roads, and of the bird's. Just because a bird doesn't come straight to the trap doesn't mean it's not interested--give it time. Check each bird thoroughly for any signs of injury or illness. Learn from each trapping experience, and apply what you learn to the next one.